Banaras, Varanasi or Kasi is a Kaleidoscope. It is also a phoenix among cities having emerged more vibrant and colorful from the many destructions it has faced. It is considered the home of 330 million gods who are held together by an enormous corpus of mythology and are the very essence of the city. The human endeavor is equally inspiring. Rich textiles, Unique handicrafts, delectable food, intriguing aphorism, eternal Ganga, serene Ghats, the ever-consuming flames of Manikarnika and the adobe of Lord Vishwanath and much more. In the tradition of Annapurna, the goddess of food, this city whets the appetite of the scholar and the layman.

The sacred Ganges is a specially tailored itinerary to give you an immersive cultural experience in Temples, Architecture, Rituals, Food and Music in the Kasi right in the heart of the Ganges that sustained it. The tour will take you to heritage sites in and around the Varanasi. We will travel to sites of incredible historical importance guided by Madhusudhanan Kalaichelvan, one of the most well informed and scholarly subject matter experts. Madhusudhanan is the Chief Curator for Swarajya Heritage. He is an architect, conservationist, painter, epigraphist and has been conducting guided heritage tours through Road Access to Temples Heritage And Monuments (RATHAM) a part of Katrali Heritage Essentials LLP.

Over 4 days you will feel, authentic Banarasi food, traditional weaving, the trip down the Ganga, the serene Ghats, the outstanding places of learning, Sarnath. It is a packed eclectic itinerary that awaits you. For the true flavor of the city to sink in, we have designed various walks. Come with us to savor this city which predates history and promises Eternal Moksha.

18th century red sandstone Ramnagar fort was home of the former rulers of Banaras. It is believed that Veda Vyasa resided atthis place. The FORT houses an interesting and impressivemuseum. A clock that displays year, month, week, day andastronomical facts is the highlight of this museum.We will also get to marvel at the dexterous play of warp andweft of the famous Banaras weaves and get an inside viewfrom one the largest and oldest silk merchants.Next we get to treat ourselves to the sublime drink of theBanarasi citizen – The Lassi. Attractions:Old Banaras Saree wearers, Ramnagar Fort and Palace, Shiv Prasaad Lassi Bhandhar

One of the largest and the southernmostGhat, the AssiGhatprovides nourishment to the soul and the body. This is alsothe place where saint Tulasidas attained moksha.Starting from AssiGhat, our tour will proceed to the TulsiGhat covering amongst others, oldest traditional wrestlingor Khusti schools called Akharas.Attractions:Sangameshwara Temple, Rani Lakshmibai’s birthplace, Swaminath Akhara 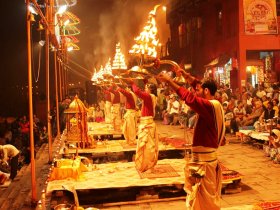 The Ganga aarti of Varanasi is a shining beacon of devotion and bliss that makes us experience the divinity in and around us. Since ages, no day has gone by when the holy Ganga River has not been ador .... More 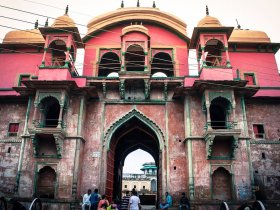 The Ramnagar fort has a temple and a museum within the grounds and the temple is dedicated to Ved Vyasa, who wrote Mahabharata, the great Indian epic. Legends have it that Ved Vyasa stayed here for a .... More
Sarnath and the Holy Trail

From the luxurious Prince of Lumbini to therenounced state of The Buddha, Sarnath is one of thefour important places of this transformation.The first sermon of the Buddha was under the Bodhitree here.

Many ruins of the monasteries date back to the 3rdcentury BC.We will tour this land of Buddha and admire theStupas, the remains of the Monasteries and alsovisit the Museum which houses the Emblem of India,The Ashoka lion capital.Attractions: MulagandhaKuti Vihara Temple, Monastery Ruins, Archeological Museum, Chaukandi Stupa

The Hanuman Chalisa is believed to have first been sung at this shrine of Bajrang Bali.The soulful outpourings of The Ramayan by santTulasidas at the Tulsimanas premises is the most adapted version of Ramayan.We will also visit the colorful Durga Mandir to finish the popular holy circuit.Attractions: ShankatMochan Hanuman, Durga Mandir, TulsiManas Mandir 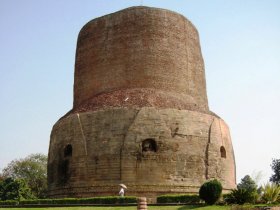 Sarnath has situated 10 km from Varanasi. The place is famous as this was where Buddha made his first sermon after attaining enlightenment at Bodh Gaya. Emperor Ashoka, who was an ardent follower of B .... More 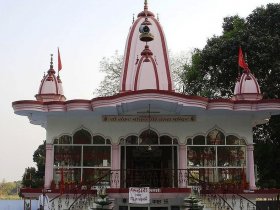 Sankat Mochan Temple is dedicated to the Lord Hanuman. This temple is also called the Monkey temple because of the presence of a lot of monkeys inside the premises. It is one of the holy temples of th .... More
Vishwanath Trail and Hanuman Ghat Trail

Repeatedly destroyed and rebuilt over the centuries, the Lord of the Universe, one among the 12 of the Jyothirlingas, Vishwanatha resides with his consorts Visalakshi and Annapoorni in the vicinity.We will navigate the colorful and narrow winding streets of old Varanasi leading up to these shrines.On the way we will also pass by Gyanvapi Mosque. The adjoining by lane is the culinary capital ofVaranasi street food and we shall indulge. Attractions: Vishwanath Gali, Vishwanath temple, Annapoorni Temple, Gyanvapi Mosque, Visalakshi Temple, KachauriGali

The famous philosopher saints have established their mutts at Kasi and we will visit a few. The visit will also include MuthuswamiDeekshitar’s Samadhi and the Varanasi residence of the Mahakavi Varanasi is synonymous with the light Hindustani classical Thumiri. We shall draw in the mellifluous rendering of this art by a local artiste.Attractions: Shankar Mutt, Shiv Mutt and Bharathiyar’s house, Dikshitar’sSamadhi, KedareshwarTemple and Ghat, Kasi Mutt Situated on the western bank of holy River Ganga, Kashi Vishwanath Temple is regarded as one of the most popular Hindu temples dedicated to Lord Shiva. Located in the heart of Varanasi, the temple is .... More 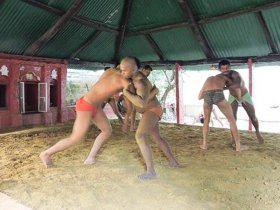 Akhadas have been an integral part of the Indian subcontinent for centuries. Housing and training aspiring wrestlers, these institutes have been primarily known for accepting only boys and men. While .... More
Departure

Raj Ghat has a pastoral atmosphere. It is the site of the ancient excavations. It also houses the study centre of philosopher J. Krishnamurthi. As the name suggests, PanchgangaGhat is the confluence of The five holy rivers Ganges, Sarasvati, Yamuna, Kirana and Dhupapapa.The Mosque of Alamgiri, also known as Beni Madhav-ka-Darera, stands tall near the Ghat on a site where the original Vindu Madhav Temple was located. Attractions:  Lal Khans Tomb and Archeological Excavations, Vindhu Madhav Temple, Alamgiri Mosque

Established in 1916, The Banaras Hindu University is one of theoldest and the largest universities in Asia.It houses a Thamizh department which has been active for five decades. It has been chaired by many illustrious tamilscholars.The Tamil department has contributed in strengthening Tamil culture in the city of Varanasi through various cultural initiatives. Attractions: Tamil Department 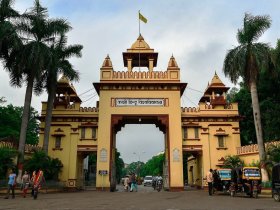 Banaras Hindu University is situated in Varanasi and serves as an attractive study destination for students hailing from the northern, southern and even eastern regions of India. The University came i .... More 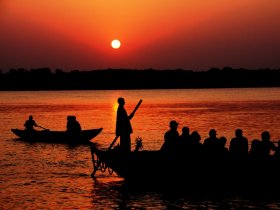 The best part of enjoying River Ganges is taking up a boat ride on the river. River Ganges run through the city and there are numerous ghats that connect the river to the land.